1. Percutaneous implantation of an interspinous disc distraction and reloading device

5. Injection of the ‘scaffold-graft’ into the IVD space

6. Sealing of the drilled cavity

In his famous ‘The Logical Song’, the Voice of Supertramp Roger Hodgson indicates that ‘Sometimes, it’s essential to be sensible, logical, responsible and practical’.

The author had a large personal and successful experience by directly injecting bone marrow mesenchymal stem cells (BM-MSCs) into tibial non-unions. He also participated in the development of an interspinous device (Declerck) and a specially designed needle to perpendicularly inject cells into the IVD (Fig. 114a). Evidently, he was aware of the animal studies regarding the implantation of mesenchymal cells into their induced degenerative IVDs.

Fig. 114a. Proposal for a curved needle-guided approach to perpendicularly inject cells into the centre of a degenerated intervertebral disc without disturbing the annulus fibrosus (technical drawing by Olivier Jacobus).

On this basis he developed his own combined surgical trial implantation technique. The nucleus augmentation is realised by a percutaneously perpendicular intradiscally needle guided delivery of a fatty scaffold mixed with bone marrow MSCs, and supplemented by a percutaneous implantation of an interspinous disc distractive reloading device. Based on the extensive literature (Declerck), it is his absolute conviction that a biological treatment of the degenerated NP always needs to be joined by a biomechanical technique (Sénegas). Nothing more sensible, logical, and practical!

The objective of the above mentioned combination was to increase the stiffness*,**,*** of the degenerating intervertebral unit by remodelling the IVD tissue achieving the formation of a fibrocartilaginous tissue in the IVD space. It was anticipated that this combination might settle the LBP by neutralisation of the ongoing degenerative intradiscal processes, by cicatrisation of the intradiscal degenerative annular and endplate lesions, and by further stiffening the already disturbed mechanical behaviour of the IVD. This type of innovative treatment does not aim at restoring IVD height, nor the IVD ECM and the IVD pressure.

An interspinous device in lieu of a soft pedicular stabilisation system was implanted first because it distracts the IVD space. Percutaneously inserting such a device with the Kyphon instrumentation (Fig. 80b) is considered the least aggressive mechanical approach (Declerck).

The device nearly is harmless to the essential spinal muscle mantle and easily may be removed at some stage following implantation. It allows for necessary immediate loading of the ‘scaffold-graft’ at physiological levels (Hauschka) and for restricting of non-physiological motion at the level of the spinal segment.

In vitro and in vivo animal studies demonstrated that IVD distraction can normalize intradiscal height and pressure. Interspinous devices may improve the healing processes of the tears in the posterior portion of the AF. The degenerative annular radial tears cause irreversible structural changes and create non-physiological hypermobility that cannot be stabilized sufficiently by muscles and ligaments. The tears cause loss of normal spinal balance and decrease lordosis (Schnake). By percutaneously inserting the Kyphon’s interspinous device, these posterior horizontally oriented tears may be stretched vertically allowing more scar tissue to grow into these tears.

During the procedure of dynamic stabilisation by percutaneously inserting the Kyphon’s interspinous device, processing of the ‘scaffold-graft’ is readily performed in the operating room for immediate implantation. Bevelled and internally polished needles (6 to 8 cm in length and 1.5 mm in internal diameter) are inserted into the spongy bone of the posterior iliac crests. Bone marrow is aspirated (40 to 50 cc) and transferred  to 15 ml conical tubes which contain an anticoagulant solution (citric acid, sodium citrate, and dextrose). At the same time 50 cc of whole blood is aspirated and transferred as well. To sediment the cells, the tubes are spun by density-gradient centrifugation at 2000 rpm for 5 minutes. It is known that the centrifuging bone marrow removes growth factors that may inhibit the fibroblastic response and increases the number of fibroblast progenitor cells (Muschler). The resulting cell pellet of the platelet-rich plasma (PRP) from whole blood contains multiple anti-inflammatory cytokines concentrated at high levels.

For years the author inserted so-called meaningless fat grafts and spongious bone in the void of a degenerated IVD which then was stabilised by a soft dynamic pedicular stabilisation system. When for one reason or the other, a MRI was thought to be needed for evaluation in the postoperative period, the author was surprised to regularly remark a regression or disappearance of the Modic signs as well as a decrease of the ‘black’ aging discogenic signal.

The MRI changes were considered a sign of fibrosis and not of regeneration! In the meantime, cells from fat have been shown to be useful in regeneration of cartilage and fibrous tissue (McKay; Ringe). Moreover, fat contains a higher concentration of MSCs which have the possibility to transform into an osteoblastic, chondroblastic or fibroblastic cell lineage. Therefore, and rather respecting the normal age and degeneration related fibrous involution of the IVD, it was thought that mixing a fat graft with the cell pellets of centrifuged bone marrow and whole blood and pouring this mixture into a syringe for slow intradiscal injection could be tried as a kind of ‘scaffold-graft’ to stimulate the formation of fibrous scar tissue inside the degenerated IVD (Hosaka; Nagae; Tabata).

A transpedicular technique is used similarly as for performing a cementoplasty. In order to avoid further iatrogenic annular disruption, a trans-endplate approach needed to be sought for entering the IVD (Johannessen; Seroussi). The spot to aim for is the center of the endplate because it is weaker than the posterolateral and periphery areas (Declerck). Because of the vertebral anatomy and for perforating the center of the endplate, the pedicle and the vertebral body need to be penetrated in a curved fashion. To successfully drill a curved insertion path that would deliver the ‘scaffold-graft’ through the endplate into the targeted site of the NP, a special and internally polished needle was designed (Fig. 114b). The insertion technique does not weaken the endplate structure sufficiently to bring about a fracture (Schechtman). Once inserted in the IVD, the NP and the degenerative debris were aspirated causing the IVD to decrease its height. For potentially increasing the void in the degenerated IVD and measuring the volume of the created cavity, an expandable balloon of non-resorbable material is introduced into the IVD and inflated with some kind of biocompatible and incompressible fluid. 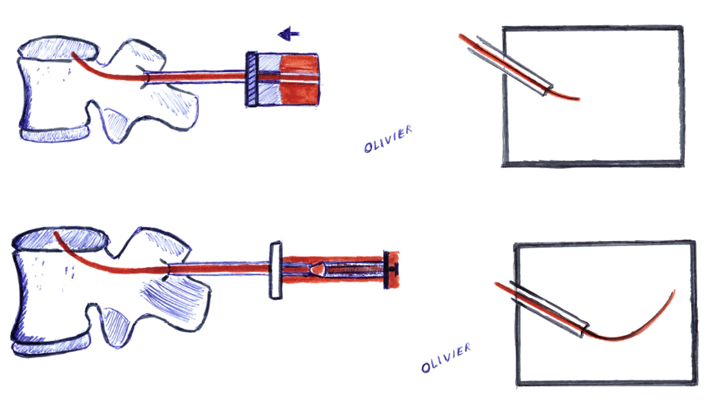 Fig. 114b. Combined curved transpedicular-trans-endplate approach for delivering an autologous ‘scaffold-graft’ into the centre of a degenerated intervertebral disc. An inner elastic tube inside a stiff outer tube takes a curved pathway perforating the endplate into the intervertebral disc (technical drawing by Olivier Jacobus).

The delivery of an autologous ‘scaffold-graft’ through the pedicle into the IVD should not cause immunogenicity problems because the IVD is an avascular structure and as such immune-privileged. Under controlled pressure the ‘scaffold-graft’ is transplanted into the IVD and fills the volume (the size and the shape) of the created NP cavity without further distracting the IVD space and without trying to restore the IVD height. The delivery vehicle ensures that the MSCs remain in the IVD cavity.

To overcome a leak of elements of the ‘scaffold-graft’ into the drilled canal and into the vertebral body, the canal is injected with bone cement till the level of the endplate. This is performed under radioscopic control.

Based on the results of MSC injections without controlled loaded conditions (Goldschlager; Oehme; Orozsco; Yoshikawa), a short-term analysis evaluation was conducted regarding the behavior of the implanted bone marrow derived MSCs under ‘reloaded’ conditions. At one year (which means nothing for potential long-term results!) 16 out of 19 patients, who initially only reported long-standing LBP without leg pains, answered not having experienced any more pain since the third postoperative month. Technical evaluation by magnetic resonance imaging showed no recovery of the IVD height. A vacuum phenomenon was not seen. The signal intensity on T2-weighted images was high, indicating fibrotic cicatrisation.

The author has no clear explanation for an exact mechanism that allows the transformation of the remaining intradiscal tissue into a fibrocartilaginous cicatrisation tissue. The mechanism by which fibrogenesis is stimulated under biologic loading conditions (compression and tension) remains something of a mystery.

Cell viability does not seem to be affected by passage through the spinal needle.

The progressing change of the IVD medium into a more chondrogenic and fibrous medium during degeneration may induce the differentiation of the transplanted MSCs into fibrocytes. A communication may have been created between the injected MSCs and the remaining cells in the NP, AF and endplate. It is possible that local factors in the remaining intradiscal tissue stimulate the injected connective tissue progenitor cells to produce a ‘fibrocartilaginous’ tissue by some kind of still unknown bioactive cell stimulation.

The introduction of a fibroblast growth factor-2 (FGF-2) may have targeted all local cells and enhanced the proliferation of the injected fibroblast progenitor cells. This factor inhibits differentiation of bone marrow MSCs into osteoblasts and chondroblasts. Because the bone marrow is centrifuged, more fibroblasts progenitor cells are present in the graft (Muschler). Within the damaged tissues of the IVD, fibroblastic progenitor cells, which have the potential to give rise to fibroblasts, respond to cytokines Il-4 to support fibrogenesis (Heredia). Indeed, metaplasia of chondroblasts and fibroblasts does occur from the endplate (Sénegas). It is possible that dynamic reloading in conjunction of a decreased number of other growth factors, such as either transforming growth factor-β1 (TGF-β1) or insulin-like growth factor-1 (IGF-1) or both, could induce more fibrocartilaginous tissue.

By reloading the IVD under ‘biologic’ compression and tension an environment is created where MSCs can grow and proliferate and potentially differentiate into functioning fibrocytes producing more scar tissue to fill up the fissures within the degenerated disc and/or stimulate the invading fibrocytes in the annular scar tissue. Indeed, mechanical signals are important mediators for the connective tissue progenitors to differentiate. When the abnormal high biomechanical stresses are reduced in the degenerating IVD (i.e. following the implanting an interspinous device), the degenerative processes inside that IVD can be neutralised so that the IVD becomes fibrous scar tissue (Sénégas).

The combination of an IVD reloading system with a perpedicular injection of a fatty scaffold and bone marrow MSCs into the NP through a special designed needle keeps promises for the future treatment.

* One rationale for measuring resistance to displacement is to study stiffness.

** Mathematically, stiffness is defined as the resultant of the load applied and the displacement produced.

*** The stiffness of intact spine motion segments has been estimated in the range of 600 to 700N/mm in axial compression and 100 to 200 N/mm in anterior, posterior, or lateral shear, noting, however, considerable individual variation (Ashton-Miller).

I refer to the separate chapter