In lieu of complying with his compulsory Belgian military obligations, dr. med. Guy opted to fulfill a short-term medical job in Riyadh, Saudi-Arabia, before completing a humanitarian general orthopaedic and trauma surgical function in Kingstown, St-Vincent and the Grenadines in the West-Indies (official Belgian registration III/22/83/163/1596). 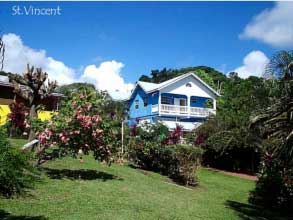 During an amazing period on this exotic island, dr. Guy completed his humanitarian orthopaedic surgical function at the local Kingston General Hospital in St Vincent.

Against all odds, but with his obstinate tenacity and perseverance, Guy pushed himself through very difficult situations which are not encountered in the developed world. As routine Western medications were not always available, he gradually realized the very high value of the traditional but alternative phytotherapy for routine daily medical conditions (i.e. in the classical medical field, the chemical disulfide bridges of the papaya fruit are used for chymopapain chemonucleolysis and treatment of severe skin wounds). But, respecting the mysterious world of the voodoo spirit possession stirring ceremonies and rituals, Guy rapidly realised that he had no West African ancestors.

Although Western and financially lucrative ‘medical diseases’ were nonexistent, some inhabitants having spent some time as sugar cane cutters in the fields of Florida became experts towards the ‘white doctor’ in malingering such benign conditions as ‘atypical low back pain’, ‘headaches’, ‘sleep disorders’, and ‘overall body pain conditions’. Worthless to say that the ‘disease’ disappeared immediately when the invalidity premium was finally deposited on their bank account.

Dr. Guy was greatly appreciated as teacher at the Kingston Medical College of the St George’s University from whom he received Honours. He enjoyed teaching orthopaedics and trauma to the USA medical students.

‘Per Veraas rescued from Caribbean – again’

‘ …. dr. Darr Lafond of the Aeromedical Evacuation Squadron at Howard Air Force Base in Panama contacted dr. Guy Declerck, the island’s only orthopaedic surgeon. Because of the seriousness of his spinal injury, Per could not be treated in the very Third World hospital with open windows and goats and pigs outside and needed to be taken off from the tiny St. Vincent airstrip – chopped from the densely wooded, largely mountainous, volcanic terrain to the Ohio State University Hospital ...’ 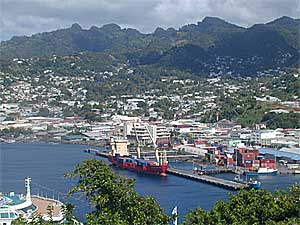 Blue waters in the small but very efficient seaport in St. Vincent.

‘The West Indian is not exactly hostile to change, but he is not much inclined to believe in it. This comes from a piece of wisdom that his climate of eternal summer teaches him. It is that, under all the parade of human effort and noise, today is like yesterday, and tomorrow will be like today. It is that. Existence is a wheel of recurring patterns from which no one escapes. It is that. All anybody does in this life is live for a while and then die for good, without finding out much. And it is that. The idea to take things easy and enjoy the passing time under the sun. To most of them, it seems a new, harmless, and apparently endless carnival’.

Illiterate people have no stairways out of their poverty if well-structured social services, such as in modern industrialized countries, are non-existent. They are unable to change their destiny. Due to very different ‘cultural’ beliefs, choices and principles to developed Western societies, human beings who experience poverty and lack education only seek to soften their miserable lives. Therefore, obtaining consumption goods with an immediate alleviating effect is more important than receiving medical goods ‘free of charge’ and only with a long-term and/or invisible effect. Poor and uneducated people, only believing in the Spirits of Nature, are unable (and probably unwilling) to understand that ‘scientific’ anticonception, vaccination, and pills against different diseases might improve their long-term well-being.