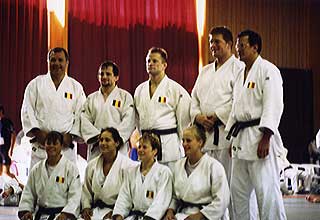 Dr. Guy became the medical doctor of the National Olympic Judo Team of Belgium as a consequence of the disappointing results of the Belgian Judo Elite during the Olympic Games of Barcelona in 1992. Only Heidi Rakels could win a bronze medal. Olympic dreams of others were scattered by injuries.

Being friends since their Classic Latin-Greek studies in the late 1970’s, ‘doc’ was given full authority for the creation of a professional medical team for the top level athletes of the famous and internationally well-known Judo Coach Jean-Marie Dedecker. Mr. J.M. Dedecker, now Flemish politician and Senator, is the founder of the political party Lijst Dedecker (LDD) (wikipedia.org/wiki/Jean-Marie_Dedecker).

It was a most wonderful period during which the Olympic Judo Elite accumulated a phenomenal 130 medals at European and World Championships. In the footsteps of the Olympic Gold Medals of Robert Van de Walle and Ingrid Berghmans, a further 6 medals were won at the 1996 Atlanta and the 2000 Sydney Olympics. The superb Judo ‘gang’, trained by Alexander Jackevics as well (bronze medal Judo 1980 Moscow Olympics), principally consisted of:

During this eight-year period ‘doc’ was chairman of the medical commission of the Flemish Judo Federation. Based on the highly considered principles of Australian Sports Medicine, dr. Guy was responsible for the appropriate medical environment, supervision and follow-up of the Olympic Judo Elite. The nearly weekly medical chats with the Olympic athletes certainly prevented unexpected surprises.

‘Doc’ made his reputation by being very ‘attentive’ on the tatami side lines. His acute and appropriate orthopaedic interventions were greatly appreciated. Not only the Belgian elite but a lot of judo athletes of all Continents still owe their health and further successes to his accurate medical approaches. Some athletes were prevented from an early end of their sportive careers and later became even European, World, and Olympic champions (http://www.youtube.com/watch?v=0nZ74JxA5as).

Dr. Guy admires his friend Jean-Marie Dedecker for his frank but honest directness, humanitarian soul, phenomenal intellect, and memory. His sportive, business, and political insights are equal to only a few. In the introduction of the book ‘Ik, Jean-Marie Dedecker’ (ISBN 90-5617-189-5), ‘doc’ lifts a tip of this remarkable personality.

‘Haematocrite or hypocrite. The European Convention for Human Rights apparently is of no concern to cyclists’ - reflection on the use of dope