Dedication to the mothers of my children. June 2014.

For most human individuals, aspirations remain utopic and unreachable. But intoxicated by my intellectual ambition, my consuming thirst for understanding could not be quenched. Teaching, I was told, is a kind of unleashing creativity. I shrugged away linguistic, religious, familiar, and materialistic warnings. It required more than an effort of imagination to escape from the prison of those educative obligations. Hence, the one who pursues success, who wants to remain healthy, and who ambitions a happy and intense relationship, requires determinacy more than intelligence. Achieving something exceptional in life has greater impact on an individual than maintaining low-level familiar relationships. By now, and against all warnings, emotions are still running through my system in a way that is unbelievable. And be sure: ‘it’s better to be hated for what I am than to be loved for what I’m not.’

The spinal column is involved in metastatic disease to a much larger degree than any other segment of the bony skeleton and very probably related to its active haematopoietic function. All malignant tumours localized in different parts of the body, including the brain, can metastasize into the vertebral bodies. Carcinomas of breast, prostate, and lung are well known tumors disseminating in the axial skeleton. 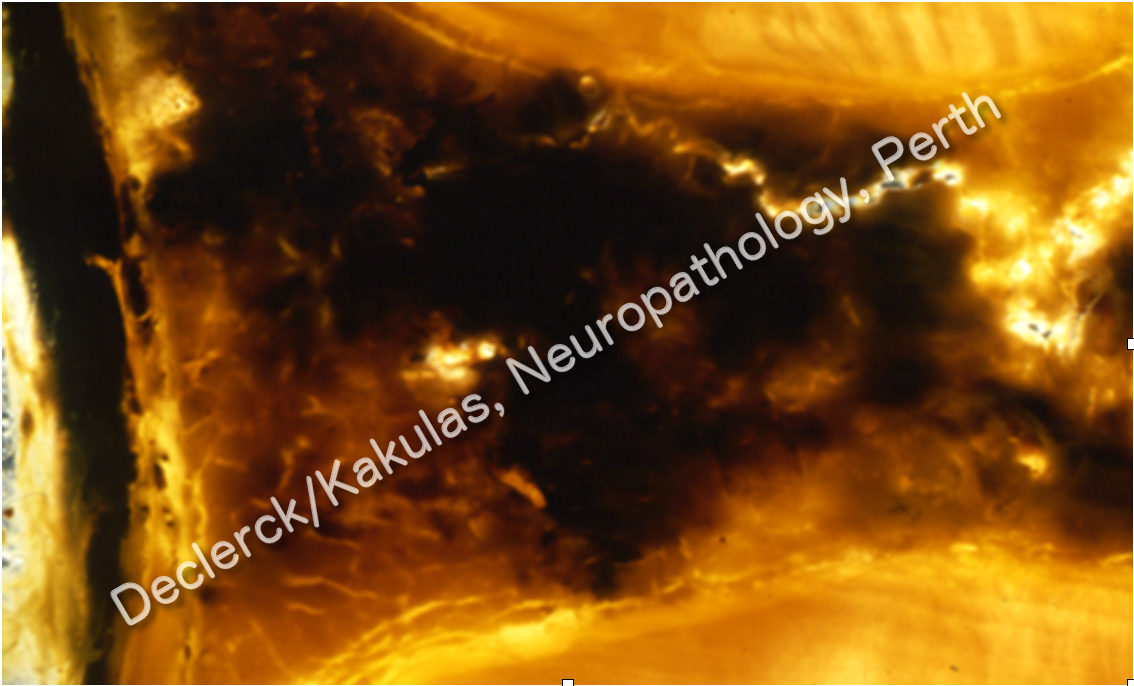 A77/93 - M/53 - Squamous cell lung carcinoma. Metastatic vertebral invasion with destruction and collapse of the vertebra

The literature is not uniform on the incidence of metastatic deposits in the vertebral columns (Table 1).

The Department of Neuropathology, Royal Perth Hospital, University of Western Australia, was established in 1958. Detailed neuropathological postmortem observations have been documented on 23539 cases till the end of 1988 and are still going on. Most individuals had died from diseases other than carcinoma. At the completion of a thorough post-mortem examination, all suspicions abnormalities from each organ were submitted for histological examination.

Department of Anatomy and Human Biology, University of Western Australia

This work was suggested to the author by the late Sir George Bedbrook. Spinal metastatic disease has become an increasingly important area worldwide as a result of improved palliative treatments of cancer. Vertebral metastases have a major clinical significance. Not only is it an indicator of poor prognosis, but also a major cause of suffering by producing intense pain, vertebral instability (in the biomechanical terms!), unusual and non-classical neurological clinical presentation, and disruption of neural function with loss of urinary or sphincter control or complete paralysis. 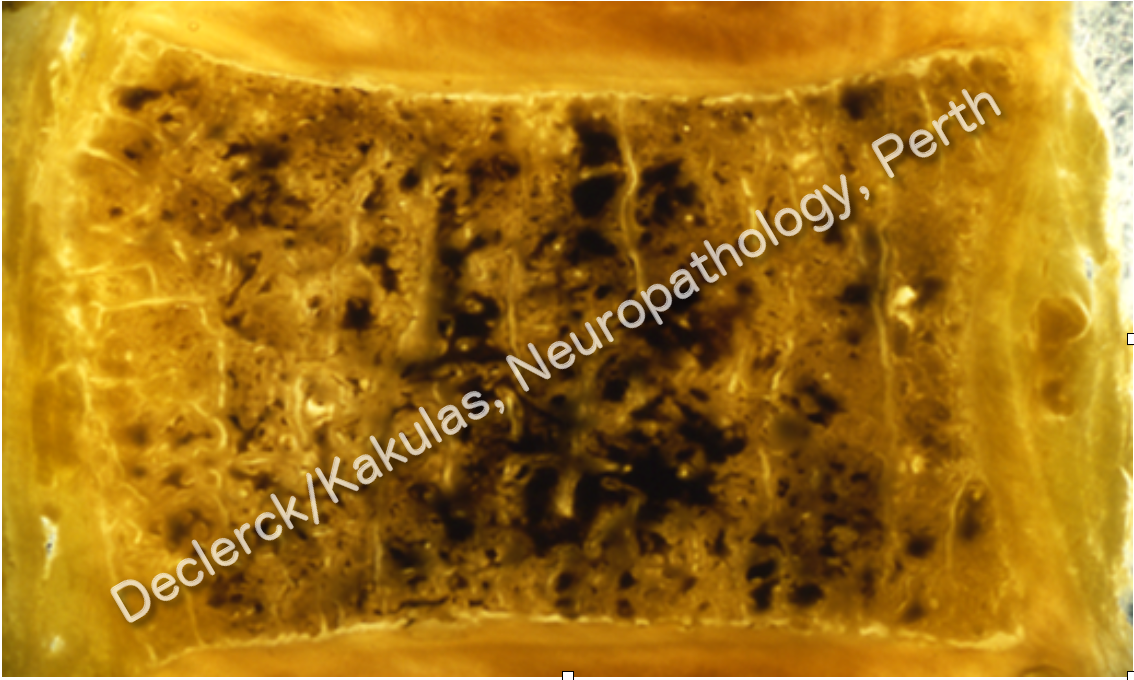 All clinical, surgical, and pathological data on 505 cases of spinal metastatic disease are tabulated to evaluate:

. the origin of the primary tumor, if known,

. the incidence of metastatic spread to the spine of all types of malignant tumors,

. the locations of metastatic spread,

. the correlation between the primary tumor and its metastatic pattern,

. the pattern of spread of a spinal metastasis by cryosectioning and surface cryoplaning of vertebrae,

. the problem of spinal metastasis with and without cord compression,

. the presence and locations of metastases in other organs,

. the neuropathological changes in the spinal cord parenchyma (histology),

. the clinical outcome of surgical decompression versus radiotherapy in established cases of acute paraplegia

due to metastatic spinal carcinoma.

All clinical, surgical, and pathological data on 505 cases of spinal metastatic disease are tabulated to provide:

. a pathological basis on the spinal metastatic behavior of malignant soft tissue tumors,

. exact autopsy data on the incidence of metastatic spread of different types of carcinomas,

. a pathological and surgical basis to spinal surgeons dealing with spinal metastases,

Selected for this study were all cases with (a) histological proven primary malignancy, and (b) microscopic evidence of the macroscopic rarefaction in the vertebral bodies. In a consecutive series of 23539 necropsies, 2597 patients with primary malignancies were fully documented (Table 2). There were 2187 cases with a primary carcinoma, 318 cases of malignant glioma, 71 malignant melanomas, and 21 mesotheliomas. The malignant gliomas included astrocytomas, ependynomas, oligodendrogliomas, glioblastomas, and medulloblastomas. Other occurring malignancies of the reticulo-endothelial system (468 cases) such as leukaemia, lymphoma, malignant myeloma, Hogdkin, non-Hodgkin, lymphosarcoma, and reticulum cell sarcoma were excluded for this evaluation.

It is remarkable that in the group of carcinomas, the origin of the malignancy remained unknown during life and was only found following autopsy in 291 out of the 2187 cases (13 %). In 82 out of 2187 cases (4%) the carcinoma was an unexpected and an incidental autopsy finding. In none of these 82 specimen was there evidence of any spinal metastatic lesion. 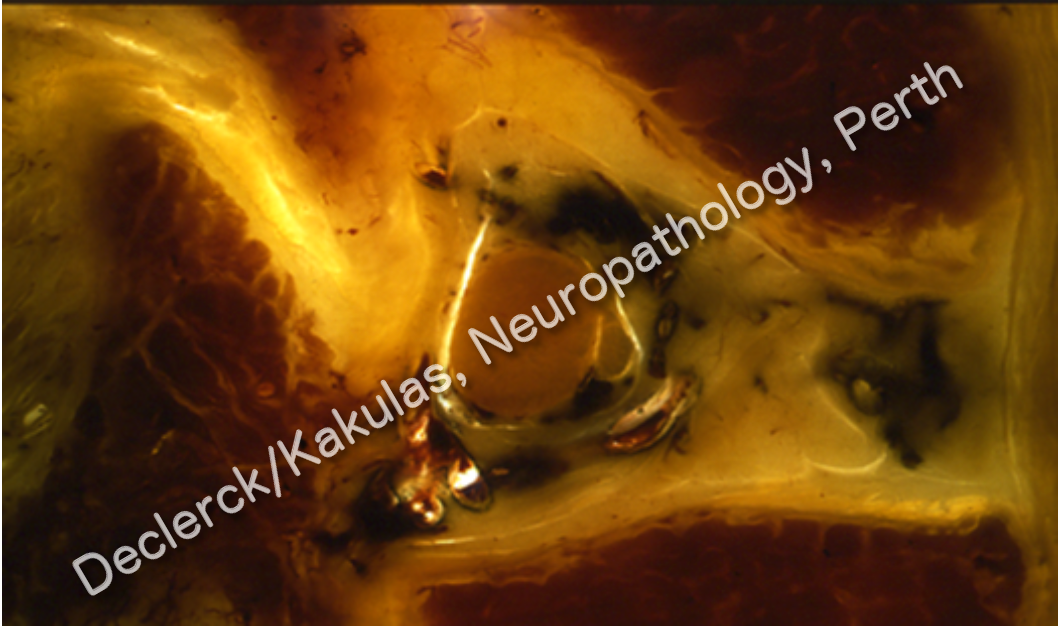 The most common sites for a primary carcinoma metastasizing to the spine were malignant tumours of the breast (41.50 %), the prostate (29 %), lung and bronchus (29%). These are the carcinomas known to have a predilection for the spinal column. The percentage of histologically proven metastasis in the vertebral bodies according to the different primary sites is tabulated in Table 3. An unexpected high incidence of spinal metastatic spread was found for carcinomas of the bladder (20 %), uterus and cervix (19%), nasopharynx (17%),  peripheral soft tissue carcinoma (14 %), and pancreas (14%). Regarding the gastrointestinal tract, the intrathoracic localized carcinoma of the oesophagus revealed a nearly 8% of spinal metastases. The malignant tumours of the stomach-pylorus-duodenum complex metastasized to the spine in 13%, the small bowel in 11%, and the colon in 13% of the cases. In presence of a carcinoma of the caecum or the rectum, metastatic dissemination to the spine was observed in respectively 6% and 9 %. Carcinoma of the thyroid only revealed a surprisingly low 5% of spinal metastatic spread in this series. Concerning the cutaneous malignancies, 24 out of the 71 cases (34%) with malignant melanoma evidenced metastases in the retrieved spines (Table 2), 9% of those who were diagnosed a squamous cell carcinoma showed cancerous spinal involvement. In this series 6 patients were documented as having basal cell carcinoma of which 2 (33%) had their vertebrae involved in the disease. 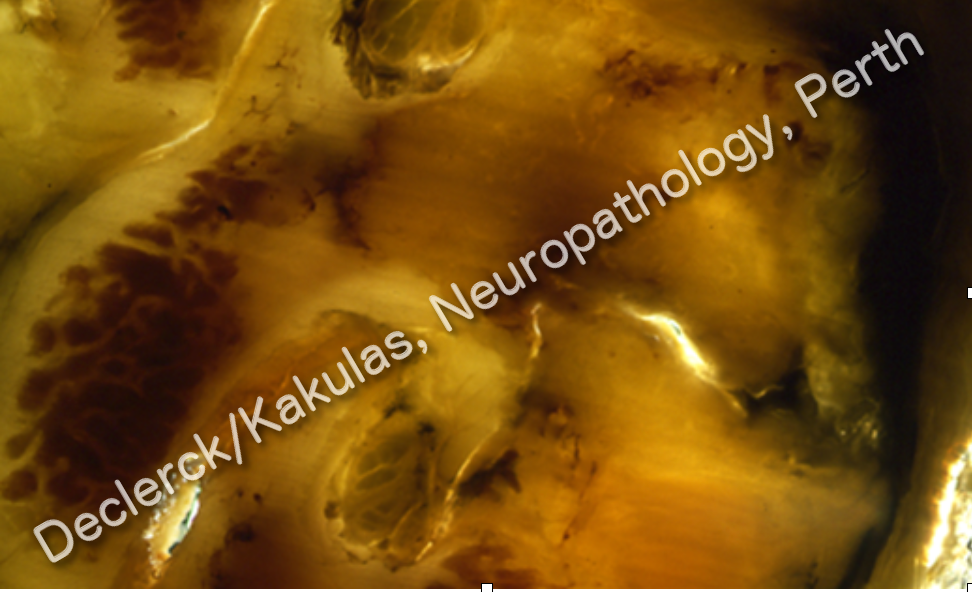 A84/228 – F/34 – Bronchus carcinoma. Tumoral invasion of the pedicle and tumoral mass around the spinal nerve root

Table 3. Origin of the 450 vertebral metastases in 2187 autopsy cases of primary carcinoma

. Unlike the traumatic spinal cord patient it is difficult to classify the neurological state of the  spinal metastatic patient into such specific clinical syndromes as the central cord syndrome, posterior cord sparing, Brown-Séquard or anterior spinal artery   syndromes. The clinical signs reflect a very atypical and asymmetrical involvement of different parts of the white and the grey matter of the spinal cord. Preliminary studies referred to a circumferential extradural compressive myelopathy as the offending mechanism.

. The majority of patients presented a characteristic pattern of clinical events and all had major bladder impairment.

. All had extensive extradural metastases

. In all cases the primary carcinoma had additional metastatic deposits in a minimum of 3 other organs. A varying triade of involvement of the lungs, the liver, bone marrow, adrenal glands, lymph nodes, and kidney was found at each autopsy.

. There is no particular pattern of spread for any type of primary carcinoma.